41010
Bologna, Alessandro Benacci, 1571 4° (207x137 mm). [4], 56, [1] ll., lacking the last leaf blank. Woodcut printer’s device on title; woodcut headpieces and initials. 19th-century half leather on marbled boards; flat spine into compartments, with title in gilt. Edges sprinkled in red and blue. An excellent copy, slightly staining to title and first leaves. The first and very scarce edition of this fundamental source on Ferrara earthquake. Within the frame of a learned conversation of the Este court, the Bolognese nobleman Maggio – who traveled to Ferrara to witness the damage to the celebrated palaces and churches - analyses its possible causes with Fabio Albergati, Paolo Casali, and Giulio dalla Porta, dismissing the interpretation of earthquake as supernatural or miracolous events. A French translation of the dialogue was published in Paris in 1575. “In his dialogue […] naturalist explanations dominate and religion fades away. Just as in portion of Buoni’s dialogue, the emphasis on naturalistic explanations was intended to undermine the papal claims of divine punishment. Maggio’s primary goal was to demonstrate that the Ferrarese earthquakes were not supernatural. To do this he tried to reconcile the differences between the particularities of the Ferrarese earthquakes and general Aristotelian understanding of the causes of earthquakes, that is, minimize any discrepancies between accepted theories of the natural causes of earthquakes and what was observed at Ferrara, which might suggest that these events were miracolous“ (C. Martin, Renaissance Meteorology, p. 70). STC Italian, 403; Baratta, p. 905; E. Guidoboni, I terremoti del territorio ferrarese, in F. Bocchi (ed.), Storia illustrata di Ferrara, Milano 1987, pp. 625-640; Eadem, Riti di calamità. Terremoti a Ferrara nel 1570-74, “Quaderni storici”, 19 (1989), pp. 107-136; C. Martin, Renaissance Meteorology. Pomponazzi to Descartes, Baltimore 2011, pp. 70-78.
€ 3.400 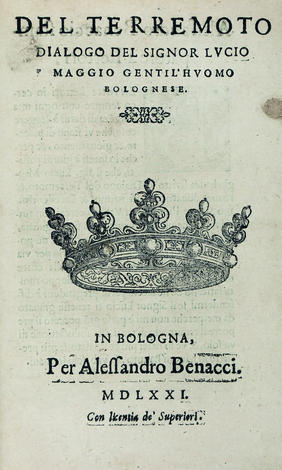