Etching (467 x 619 mm), trimmed inside the printing plate, with restorations barely visible on the recto: traces of foldings, some restored tears, a few portions erased on verso, edges reinforced. Laid down on an old greyish paperboard.

The artist's signature "Jacobus Stella pictor Lugdunensis dedicat consecratque ipse inuenit et delineauit 1621" and a dedication to Ferdinando II are inscribed in a cartouche in the lower center of the image. Scarce separately issued print depicting the Piazza della Signoria during the annual procession and presentation of tributes to the grand duke of Tuscany on the feast-day of Saint John the Baptist, June 24, 1621. The square is crowded with the usual parade typical of festival prints; two of the on-lookers deserve particular mention: à la Hitchcock, Stella includes a self-portrait (the man who is drawing shaded by a parasol). The second, and much more important figure is the woman on the right watching the proceedings through a telescope. This is the first time an illustration of a telescope is published in Florence, two years before the publication of the Saggiatore, and the first illustration of a woman using a telescope. Galileo had moved from Padua to Florence in September 1610 and started working on his compasso, beacuse his main problem was getting the lenses to Florence: still on August 18th 1618, G.F. Sagredo wrote to him from Venice "I send you four lenses for short telescope; one is less than one fourth and the others are their double. Their junctions (focal points?) cannot be more acute than those I sent to you". In Florence Jacques Stella would have met Jacques Callot, who was also working for Cosimo II, and whose own etchings appear to have influenced the present work. Telescopes were used by amateurs early on, but never seem to have been pictured. The present print suggests that the instrument had permeated society outside of science. Extremely rare print: one copy in the Getty Collection (S.C. P910002), one at the Bibliothèque municipale de Lyon, and one recently acquired by the Harvard Art Museum. A good impression, but with the defects mentioned above and a light central vertical fold. 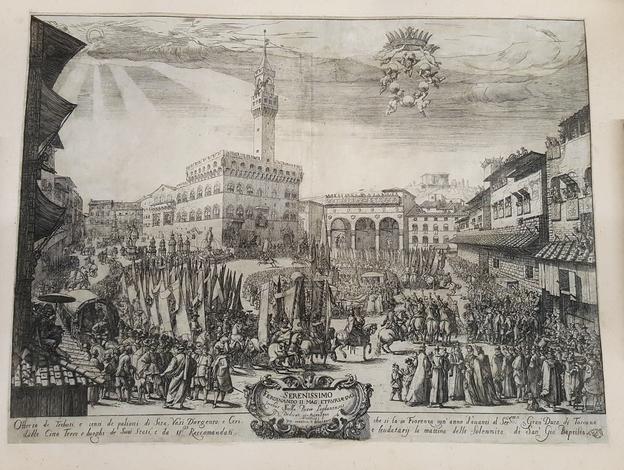